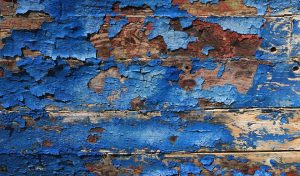 Lead paint has been a major health issue for many hundreds of years. well before it was required to be discontinued in paints and certain other products in 1978, society knew there was an issue.

People who were exposed to lead products were known to die, and have many health issues – so it was relatively easy (over time) for them to figure it out. But it was a very durable and useful product – so many did not want to give it up.

Many people assume that if you buy a home after 1978 that it will not have a lead paint issue – but that is not necessarily true. While production had to stop in 1978, dealers were allowed to sell out their stock for a period of time. Contractors tended to buy up as much as they could in that time period, and used that lead paint for several years afterward.

Lead was also used in other products, such as window glaze, certain metallic items, and other components of the home. Also, it was still used (legally) in aluminum siding well into the 80’s.

So, while 1978 is a good benchmark, lead paint and products have been found in homes even built in the early 90’s. So be safe, have things professionally tested, and be careful with your family’s health.

Jared M
17:57 18 May 19
My wife and I couldn't be happier about our experience working with Brett Maloney from Indian Rock Inspections. He was incredibly knowledgable during the entire home inspection process. We would highly recommend Brett for any home inspection needs

Rachel Francois
11:50 08 Apr 19
Brett helped me with two inspections this month and helped me feel secure in my choice! He is thorough, educational and kind.

Roger Randall
21:17 21 Mar 19
We just had Brett inspect a house we are planning to purchase. He was thorough, courteous and fair. We definitely got more than we paid for. Brett is the only person we will call in the future. His knowledge and insight were very helpful and he is a pleasure to work with.

Emily Briggs
18:00 17 Feb 19
Brett did a fantastic job with our home inspection. He is efficient and extremely knowledgeable. He was patient with our first time home buyer questions and was able to provide helpful answers in language we could understand. I will recommend him to other friends and neighbors and will absolutely use him in the future!

Ross Kratman
16:14 17 Nov 18
Brett was phenomenal to work with during my home inspection. He was extremely thorough and informative throughout the entire inspection process. He was also a very relatable guy and made sure we were on the same page. I highly recommend using him to any and all home buyers!

Chris Accetta
02:39 25 Oct 18
Brett was extremely thorough and professional. He really makes you feel like he has your best interest in everything he does. The inspection is WELL worth the money and I highly recommend Indian Rock.